This application note is applicable to ACE software version 4.30 or later.

Voice Effects in the Comm Plan

Default voice effects are enabled on particular waveforms in the Comm plan editor. This applies low-pass, high-pass, and distortion filters to the transmit audio of the radio. This default configuration is a good starting point and provides differentiation between intercoms and radios.

To enable the default voice effects:

Note: For additional control and customization of voice effects, use the transmit effects loop as discussed below.

Voice Effects in the Transceiver

To enable and customize voice effects in the Transceiver component, adjust the following parameters: 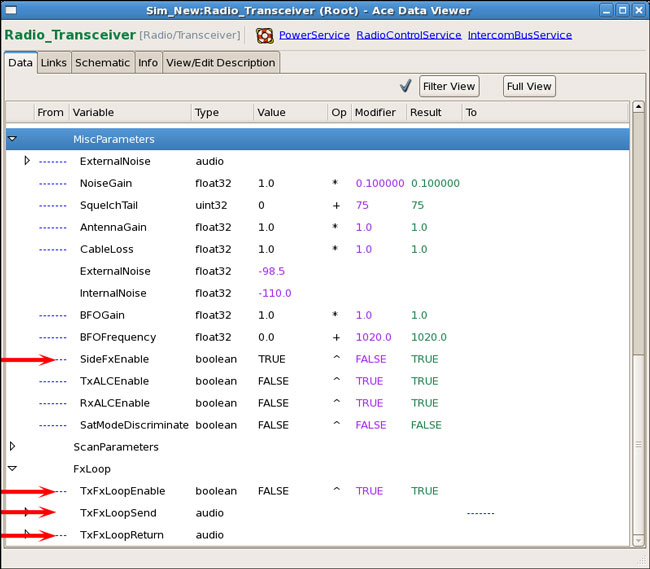 The transmit effects loop is used to implement custom radio voicing effects. The loop can consist of any chain of audio processing components. Commonly, the chain will include low-pass, high-pass, and distortion components to achieve a radio sound. More dramatic effects can be achieved by adding noise, delay, amplitude modulation, and so on. This flexibility allows the effects loop to be used for creating new radio sounds, customizing radio noise effects, or even voice disguise.

If the effects should vary based on modulation type (AM, FM, etc.), the Comm plan net number used by the RCU can drive parameters in the effects components. Likewise, controls from the host such as the radio frequency could be used to adjust the effects sound. Try using a math table to map parameters like the net or frequency to effect controls like filter frequencies or gains. See the example below.

The effects loop is implemented in the Transceiver under 'Local Audio' using 'TxFxLoopSend' and 'TxFxLoopReturn'.

Auto-Level Control (ALC) adaptively compensates for volume differences between radios on the network. Both radio receptions and transmissions can be level controlled. Choosing to enable the receive or transmit ALC depends on the source of the problematic transmissions. If transmissions from a system need to be more even in volume, use transmit ALC. On the other hand, use receive ALC if a system receives transmissions with uneven volumes from other systems whose gains cannot be adjusted.

Threshold and target level controls allow the ALC to be configured for optimal volume for any given communications model. An inline peak limiter prevents sounds from breaking a chosen maximum volume. ALC is enabled either in the Radio Helper or in the Transceiver for any radio.

Auto-Level Control in the Transceiver

To enable and customize ALC in the Transceiver component, adjust the following parameters: 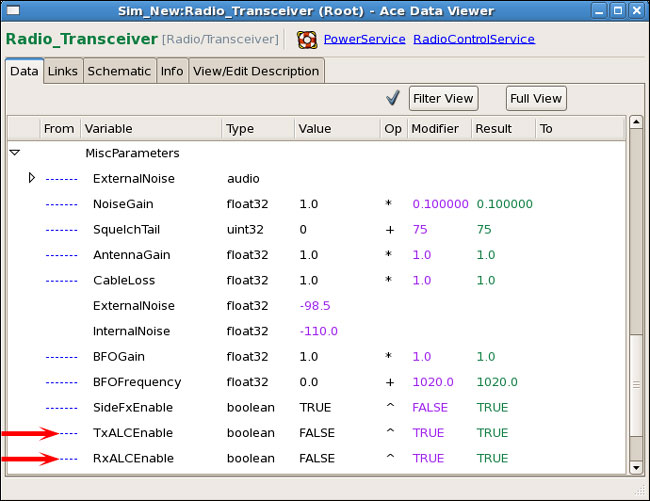 Auto-Level Control in the Radio Helper

When using the Radio Helper to automatically build radio models, ALC controls are available in the 'Advanced' tab. Under "Auto Level Control" check the enable boxes for receive or transmit. Click update and install the layout for the changes to take effect.

The default threshold is -66 decibels (dB) and the default level is -24 dB. In this configuration, signals whose root-mean-square (RMS) level is greater than -66 dB will be boosted to the target level of -24 dB. Signals with a level greater than -24 dB will be reduced in volume. Note that the smaller (more negative) the level is, the quieter the volume. The difference between the level and the threshold is effectively the maximum amount of boost to be applied to quiet signals (40 dB in this case).

If you are not using the Radio Helper, receive and transmit ALC is enabled in the Transceiver component using the 'RxALCEnable' and 'TxALCEnable' inputs.