Using the DIS Gateway to Configure Multiple Interfaces in Telestra (#101)

Telestra uses the DIS gateway file to configure many of the DIS parameters for radios, as well as other networking configuration tasks. This application note discusses using the DIS gateway to set up a variety of networking configurations. For more information about setting radio parameters, go to Application Note 93: Using the Waveform Mapping File to Set DIS Transmitter PDU Enumerations in Telestra.

Caution: Do not select Wizard. Modifying anything in the DIS Gateway window and selecting OK overwrites everything in the manually edited text file. 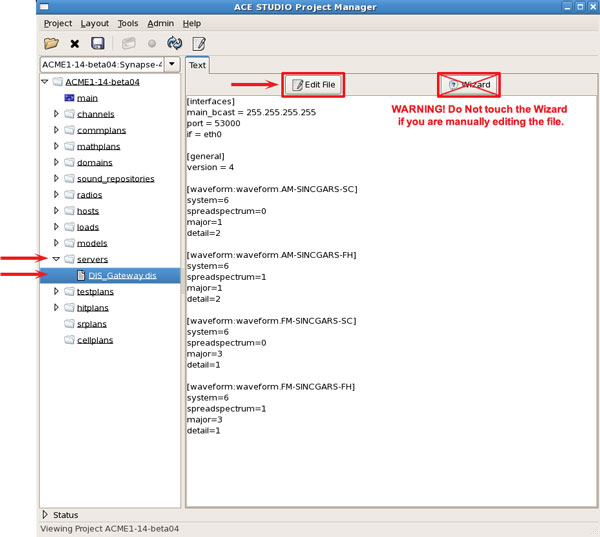 Here is an enhanced example, where each PDU type has its own multicast address:

You can also use separate ports for transmit and receive. If none are specified, the default is 53000:

Enhance the [interfaces] section to apply different rules for each DIS exercise. The example below applies special rules for a range of exercise IDs from 23–35 that use different interfaces, ports, and multicast addresses.

To give each exercise its own set of DIS network configurations, use multiple [interfaces:##] sections. To create multicast groups, add the exercise ID to the last octet. The following shows a simple mcast by exercise example:

Below are two files that show how to configure the DIS gateway. The first file is a "quick glance" DIS gateway that includes nearly all of the relevant commands in a single, valid DIS gateway file. The second file is an exhaustive, fully commented file with descriptions of what each field does.


Back to Application Notes